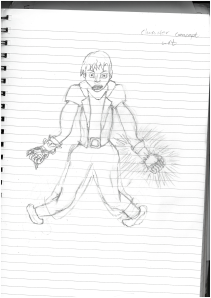 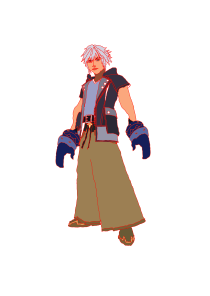 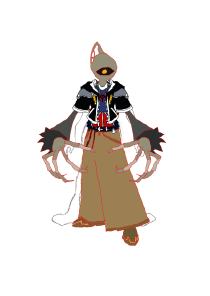 I started to draw some character concept art in the style of Tetsuya Nomura for planing my character design for me in Kingdom Hearts.

I first started with Sora’s head and shoes, with Xemnas’ coat and King Mickey’s gloves all from Kingdom Hearts 2. I then started to think of character designs that would fit me as a person. I like magic, so I used the Mimic Master’s head, Iron Maiden’s hands for a first fighting style, because I like to use quick and strong weapons. Neku’s coat was used, because I thought it looked nice and Trinity Limit Armour’s leg was for speed and mobility.

I started to think about my personality next and thought that I was a mirror that reflects back what is received; if I get treated badly, I treat badly back and vice versa. So to achieve this I chose a well known character, which was riku and drew his whole upper half and drew Ventus’ lower half for light and dark above and speed and power for the lower half. It looked alright, but it didn’t seem right, so I changed Riku’s hands for Iron maiden’s hands, because they are weapons and I chose Terra’s bottom half, because it resembles strength.

I really liked the result I currently had and was getting somewhere. I then tried to make a heartless version that I think would resemble me more. I used the heartless Wight Knight, because to me it seemed mysterious. I used Sora’s shirt and jacket to resemble some light and Prison Keeper’s hands, because they seem to fit really well with Tetsuya Nomura’s art style of very long weapons and Prison Keeper’s weapon is his hands. The hands also give it a death aspect and I like the thought of death and not scared of it in any way.

For my next stage of concept art, I will be making a front, side and back view of the fourth concept art I made with long sleves instead of short, with the arms and hands of the fifth concept art to give it the aspect of life and death with the feeling of light and dark.